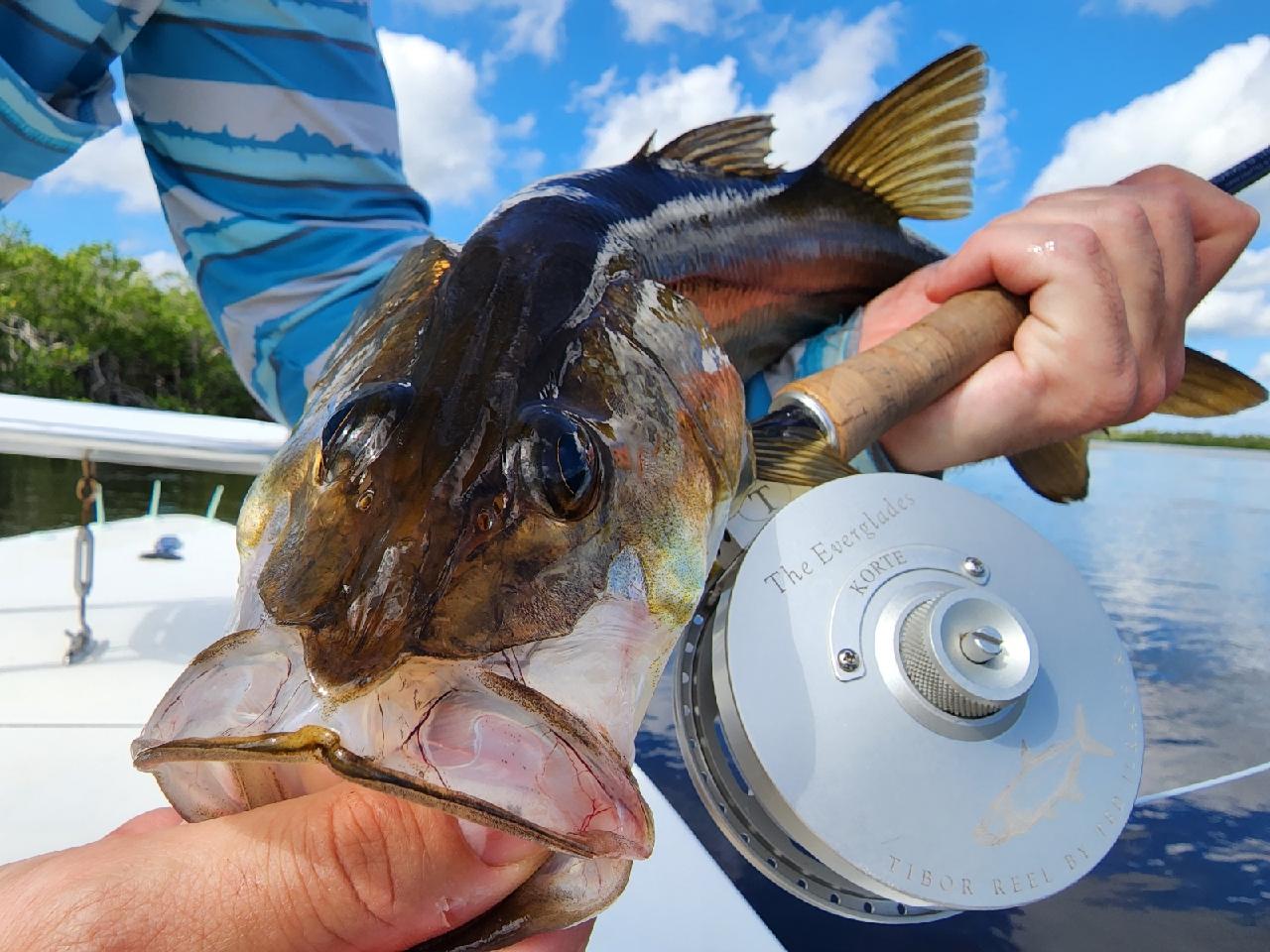 Flip Pallot said that no one man could ever know the Everglades, truer words have never been spoken.

I recently took a trip down to the glades by way of Everglades City with my friend Nathan, it was spectacular.

The ride down is really very simple. If you drive 2 1/2-3 hours south from Tampa, straight down I75, you’ll end up in Naples. Right as you’re about to cross the state on Alligator Alley, take the last exit. After you take the exit you’ll find yourself driving down bumpy, un-paved roads flanked by mangroves and water for close to 20 minutes, finally the city will come into view and you’re there.

If you’re looking for luxury, turn around. This isn’t a fancy resort town, it isn’t paradise on the beach, it is a hardcore fishing town. You’ll find a pizza shop, a breakfast place, city hall, police station, fire department, a handful of motels, Everglades Fishing Company (which is a gas station, restaurant and bait and tackle store all in one), a few trailers and houses – that’s about it. As of the 2010 census, the population was 400 people.

While this place lacks the luxury some are accustomed to, it more than makes up for it with incredible fishing. Snook, tarpon, jacks, redfish, trout, black drum, bass, sharks, goliath grouper and even the critically endangered sawfish can all be caught here. It’s authentically Florida and a true angler’s paradise.

Tips for Fishing the Everglades

This isn’t going to be like heading out to the nearest pier and kicking back in a lawn chair, it’s a bit more involved than that:

We ran deep into the glades through twisting and turning tunnels of mangroves flanked by gators on multiple sides. The polling skiff sliced through the glass calm water like a hot knife through butter. We ran until we came to a bay way in the backcountry, we idled and scanned the horizon, all the way on the other side we spied our first action. As we polled across the bay, it wasn’t just the sight of violent splashes, but the unmistakable sound of snook feeding. A cohort of snook, tarpon and ladyfish were mercilessly pounding glass minnows against a mangrove shoreline.

The water was very tannic and fresh, yet in eight feet we could see straight to the bottom, true Sweetwater. It was truly an impressive environment, an alligator to the tune of about 7 feet long was sitting on the bottom, while numerous predatory fish had the bait pushed up against the mangrove bushes, and the abundant bird life could be seen and heard everywhere. Everywhere you looked resembled a Clyde Butcher photograph.

We could’ve caught 50 snook from that spot if we had so wished, the bight was insane. It was almost like freshwater trout fishing, you could make a short cast and let your baitfish fly drift down the mangrove line in the current, one strip was all it took and a snook would jump all over it.

It was all small stuff until Nate’s fly got absolutely crushed by this 30 inch linesider, a crazy fight on a 6wt. 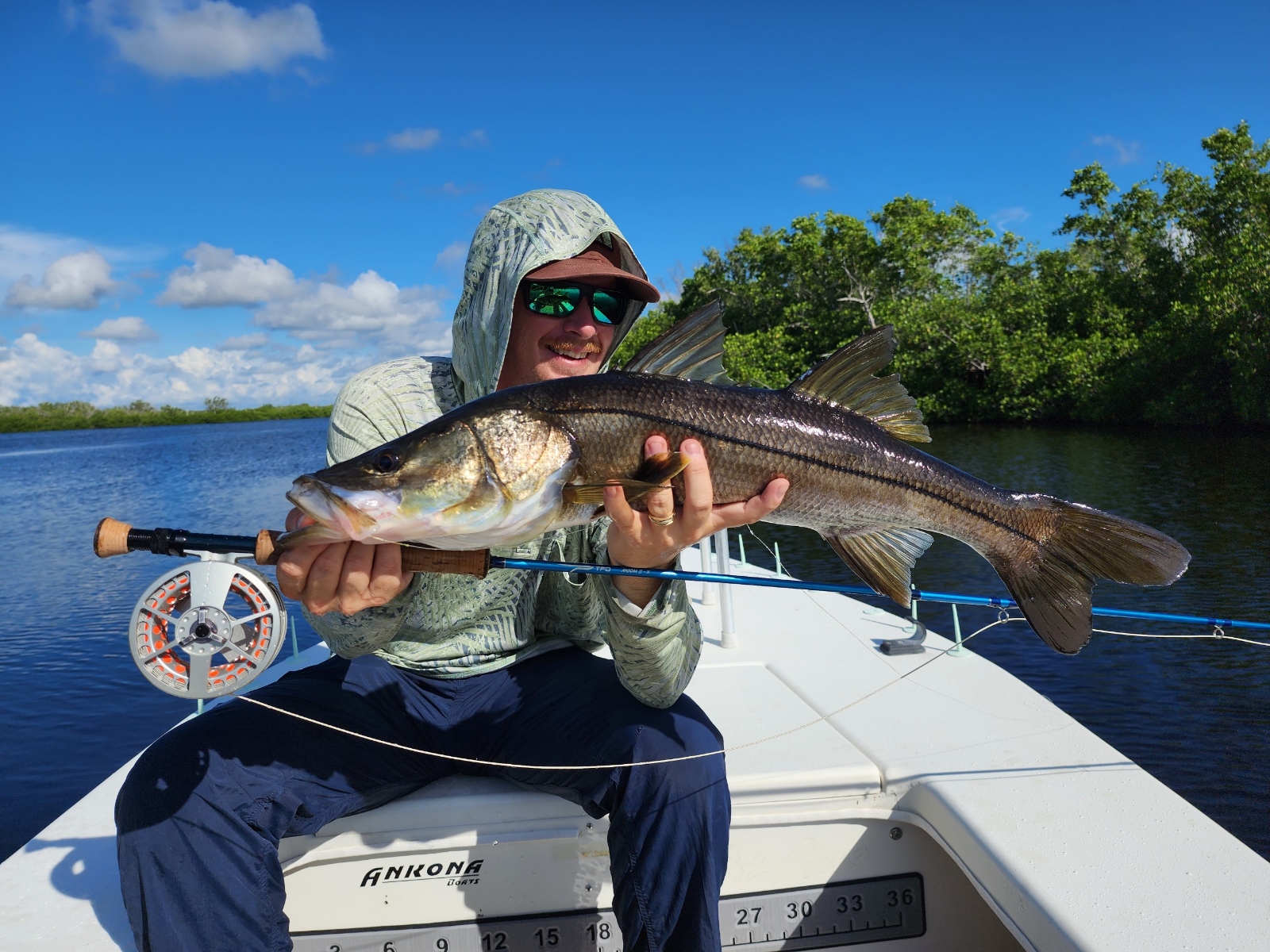 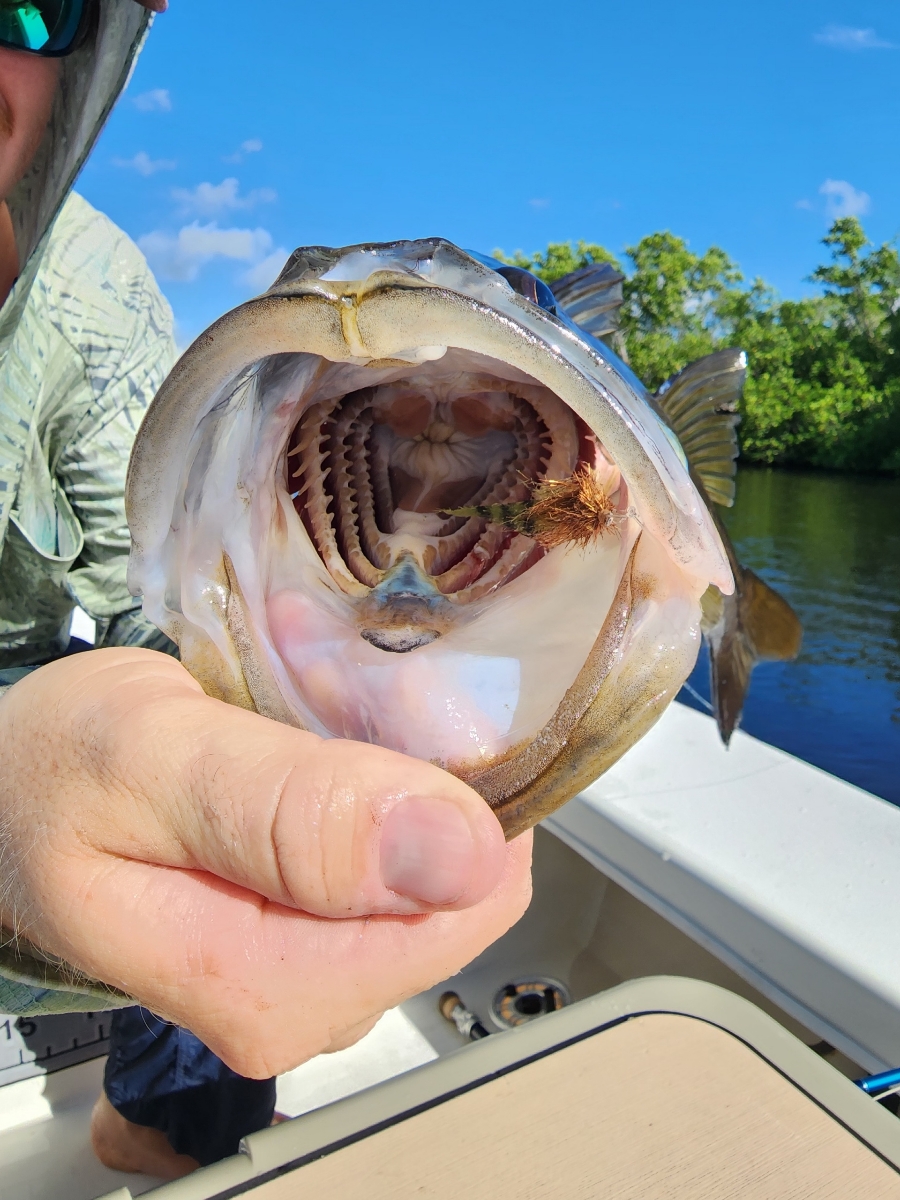 There were tarpon present, but the snook were just too active. This was fun, but we wanted to put a tarpon in the air, so we left the robalos biting.

We ran deeper into the backcountry and found ourselves once again at the mouth of a large bay with multiple feeder creeks dumping into it. Systematically, we polled and checked each creek until we found rolling fish. The fish we found weren’t just rolling, they were aggressively blasting baits. We observed fish after fish crushing small minnows, rolling constantly and otherwise making a great commotion.

With one cast and two quick twitches, Nate hooked a nice juvi poon which gave us an incredibly acrobatic display, as tarpon do. Perhaps the craziest thing was that he was able to pull this out of a school of rollers and was releasing it boat side while the rest of the fish kept blowing up less than five feet from the stern. These tarpon didn’t seem to care that we were there – in the best way possible. After Nate released his fish, I made a three foot cast, stripped it twice and was tight – unbelievable.

As tarpon do, they turn on and off in mysterious windows of time, so we decided to head in for lunch. On the way in we did some exploring and found a chickee, a popular structure in the glades used for camping (see below). While not my flavor, Nate has stayed on these structures numerous times. If you’re a camping enthusiast, give it a try! 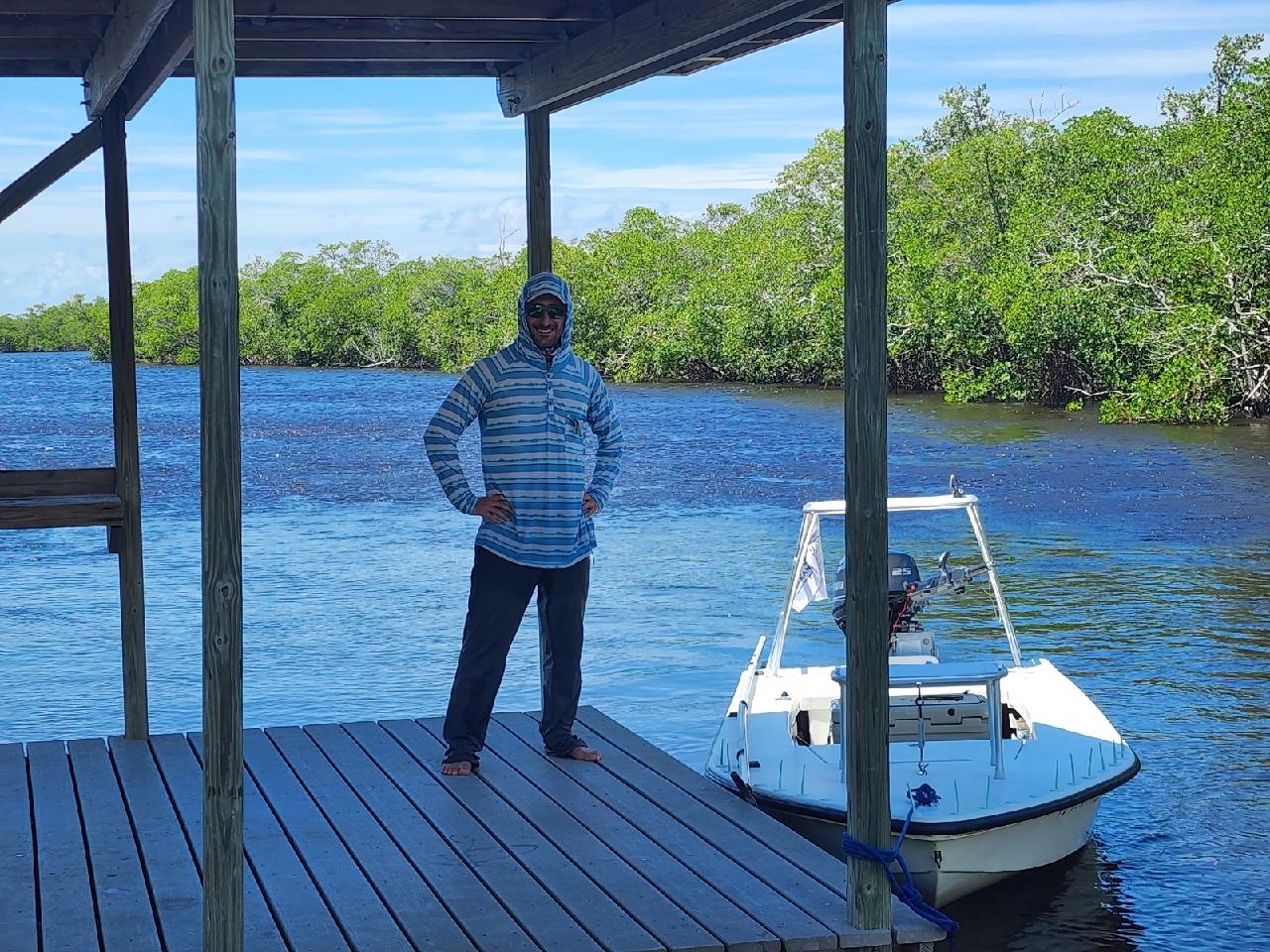 We had been on the water since roughly 7am and were starving, we had to regroup. First a visit the aforementioned Hole in the Wall Pizza, then a nap, refuel the boat and cooler and head back out for the sunset bite. More tarpon were on the agenda.

If you want to check out more content, here is my most recent post: Islamorada Itinerary. Stay tuned for Sunset Silver.

2 thoughts on “Flyfishing the Everglades for Tarpon and Snook”