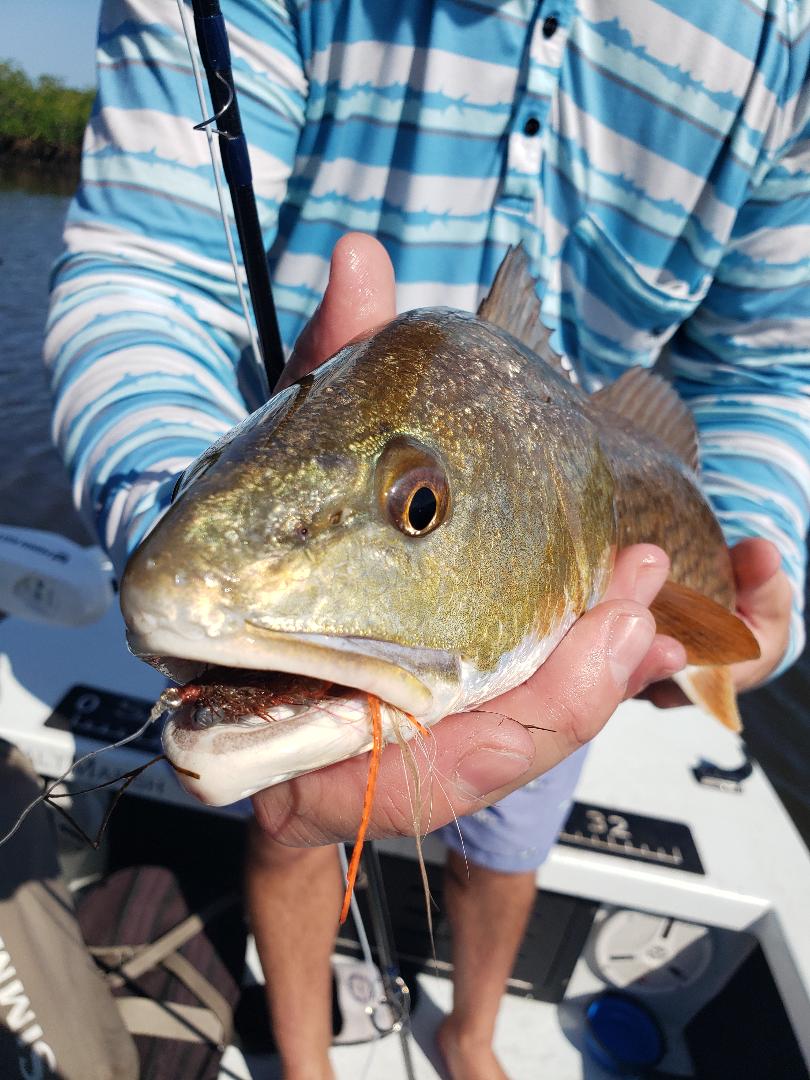 Labor day weekend, a three-day weekend meant that I had to fish for three day straight; obviously. First stop, Ozello.

The boat ramp at Ozello is only a five minute drive from the ramp in Chassahowitzka, despite this, it was very unfamiliar water. After a careful trek out to the flats, we were met with dark, muddy water that made sight fishing nearly impossible. After a few hours of looking for fish all we had to show for it was one tiny redfish caught on a jig.

Eventually we found a lagoon so shallow that we had to get out and push the boat into it. However, once we were floating in the lagoon (less than a foot of water), we noticed how clear it was. We began polling along.

I saw what I was sure was a redfish, my friend Nick saw what he was sure was a stingray. I casted to the fish, whatever it was. The result, instant hookup with a redfish and a stingray darting away. The red was hanging out with the ray eating all the small shrimp and crabs that he was kicking up.

We saw more fish that day, but they were uncooperative. Nick did hook one nice snook, but unfortunately he got off. It was a tough day in Ozello; the one redfish made it worth it.

The redfishing on the Suncoast is electric. If you don’t believe me, check out my last post. My friend Jarek, his girlfriend and myself hit the water and headed to some of our favorite spots for live baiting redfish, quite a difference from fly fishing the prior day, it didn’t disappoint.

We had multiple doubles throughout the day. Pitching shrimp and freshly caught pinfish under docks was as fun as it was productive. We totaled 17 redfish and a sheepshead and headed back to the dock early that day.

Stalking flats redfish and running from spot to spot with a livewell full of fresh baits is extremely fun, however, sometimes you have to get back to your roots.

I went fishing with an old friend who I hadn’t gone out with in a long time, Chris.

We checked out a few ponds that we hadn’t visited in a long time as well as some new spots. The new spots didn’t produce, but the spots we hadn’t checked out in years were productive.

We found some tarpon but they didn’t want to play ball, only the Mayan Cichlids.

At our final spot, a spot that I used to reliably catch snook at, I was a bit skeptical if I’m being honest. It had been almost 7 years since I had last fished it, and in that time it had been found and pillaged. Regardless, we gave it a shot. We weren’t disappointed.

We saw multiple fish eating and floating on the surface, in fact, I actually hooked a nice snook in the mid 20s range that made a few nice runs before ultimately jumping me off. It’s a fact of life, you won’t catch every single fish that you hook, sometimes it’s a mistake that you make and sometimes it’s just not your day.

My Labor Day weekend was three days of action packed fishing fun in three completely different locales. It was just what I needed before going back into the office. Aside from this, it was nice to find fish in new water, not see any red tide and also find fish in old spots that I hadn’t checked out in years.

We live in a cool place, go outside and do something.