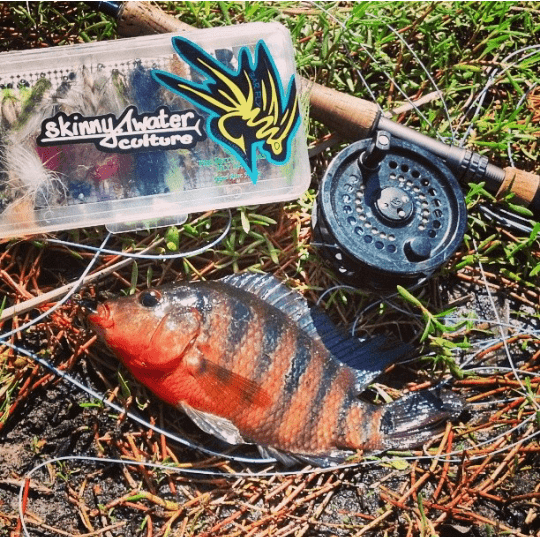 I want to take a moment to acknowledge what I feel is a little known fish that I often catch incidentally while pond fishing for tarpon and snook; the Mayan Cichlid.

They may not be silver kings or linesiders, however, this foreign member of the tilapia family will get you excited!

About the Mayan Cichlid

According to FWC, Mayan Cichlids are native to the Atlantic slope of Central and South America, that is to say, they’re invasive. They were first recorded in Florida Bay in 1983 and are now found up to at least Pinellas County. They can survive in a wide range of salinities and are cooperative for fly and spin anglers alike. Regardless of their size, Mayans always fight hard no matter the tackle.

Flies like clouser minnows and baitfish imitations produce. In contrast, spin anglers can find success with paddle tail jigs and suspending twitchbaits. My dad even once caught one on a live shrimp in Tampa Bay, by the same token, I wouldn’t be surprised to see one eat a bass worm!

These fish have a quality, white, flaky meat similar to tilapia. Despite this, I wouldn’t recommend harvesting one because they tend to live in places with less than desirable water quality.

The coolest thing about these fish is their appearance. Black stripes like a sheepshead with a black dot on its tail and a bright orange body similarly to a redfish make it truly beautiful. Mayan chichlids are always a welcome member to my fishing adventures such as “The Scum Pond Chronicles”.

Mayan cichlids are a hard fighting fish that can be caught with a variety of methods and tackle. Most notably, despite being non-native, they seem to get along well with all the local flora and fauna. When you catch your first Mayan, it will be an experience that you won’t forget!