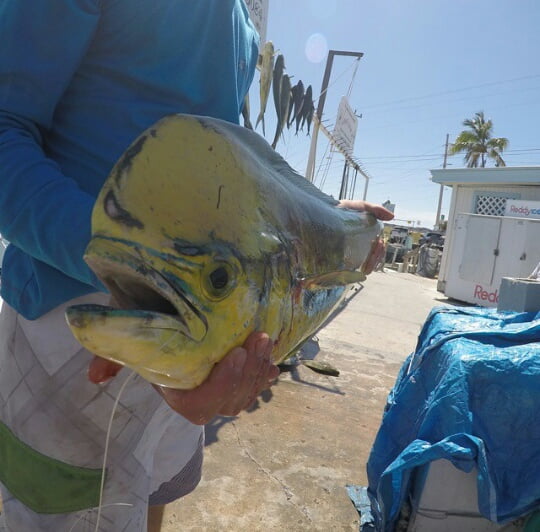 Everyone has a favorite fish. Some people are snook fanatics, some are tarpon fiends and others marvel at the mighty marlin. I love snook and tarpon, my favorite inshore fish is the redfish and my second favorite offshore species is the sailfish. However, there is one fish that for me tops all others. It takes the cake as my favorite offshore species as well as my favorite fish overall. That being said, if I could only fish for one fish for the rest of my life it would be without a doubt, the dorado (dolphin).

The title of this post pays tribute to the fish also known as dorado. More commonly this fish is known as Mahi Mahi which as a matter of fact translates to very strong. Hence, they are a great fight.

However, dolphin are so cool for so many reasons…

The reasons why I love this fish are as varied as the color patterns on the fish itself. So here’s a few:

1. They look awesome: Bull dorado or dolphin exhibits a flat squared off head, conversely the female cow has a rounded head (see below). Also their colors are unreal. In the water they’re a brilliant silver, purple and blue, however when they leave the water they gain their common yellow/green, blue and purple and silver flecks. Certainly an amazingly colored fish.

2. Demeanor: Dolphin are very aggressive fish – they fight hard and will give you some nice jumps. Once one is hooked, keep him in the water behind the boat. Many more dolphin will follow him up to see what all the commotion is about. It’s possible to catch an entire school this way. Being so aggressive they will take a number of offerings such as trolled or pitched ballyhoo both rigged and naked, flying fish, greenbacks, squid, feathers, jigs, flies and other rigs. Without a doubt versatile.

3. Bycatch: Bycatch is a species you catch while fishing for something else. When you’re dolphin fishing you may sight cast to a sailfish, hook tripletail off a palate, catch various other species like tuna species on the troll or ever a marlin (as noted below).

4. Dinner: Dolphin are without a doubt one of the best eating fish in the entire ocean. Dolphin is served as Mahi in restaurants almost everywhere. It’s definitely my favorite fish to eat and can be cooked many ways!

5.  Bait: Troll peanut dolphin in the right areas during the right times of the year and you’ll be rewarded with a marlin. With is this in mind, the carcasses also make excellent chum when shark fishing. As a matter of fact, dolphin also make great sword baits too!

6. Symbolism: Basically any restaurant or establishment you walk into in South Florida or the Keys will have a dolphin on the wall. I love the Keys, consequently, it’s just cool to me and represents offshore, blue water fishing.

The Most Important Thing:

7. Conservation: This is perhaps the most important thing. One might worry about worldwide dolphin populations because they’re so popular and many fish species are in dire straights. However, fear not the dolphin is perhaps the most sustainable fish in the world. This is because they spawn prolifically year round. A fish that is a year old weighs 20-40 pounds! If you don’t take my word for it, take Dr. Guy Harvey’s! In the link below is the Guy Harvey Ocean Foundation’s Sustainable Seafood Guide. Dorado are listed in the sustainable “good choice” column. In contrast, some tuna species are not sustainable.

Note*: Dolphin are sustainable, be that as it may, only take what you need.

Dolphin are a blue water fish, they’re pelagics. If you’re on the East Coast, the Keys or in the Panhandle then you have easy ocean access. Unfortunately, where I live in the 727 the water depths you start finding dolphin start around 100 miles, thus my favorite fish is out of reach for me. However, you could find the second species of dolphin, the pompano dolphin.

Pompano dolphin are just like regular dolphin, for example; they taste the same and likewise exhibit the same characteristics. But the only difference is that pompano dolphin don’t grow to the sizes that regular dolphin do and so are shorter and fatter to the point of almost being oblong. Around my neck of the woods you start finding pompano dolphin in about the 100 foot depths. This is because we’re so far from the Gulf Stream soon.

I will love dolphin fishing until the day I die. I can’t wait until the next time I can get offshore and can get into some.

In other words, dolphin are awesome!