Florida is a very special place when it comes to fishing. The great multitude of species that are available nearly all year round as well as the numerous ways to fish for them make it a sportfishing Mecca. That is what this story and the stories that are to come are about.

My friends and I were on our way to fish in Islamorada for the week, (as described in “Buddies and Bud N’ Mary’s) and we decided to stop in Miami to try to catch peacock bass on fly. Peacock bass were introduced into south Florida by the FWC in the 80’s in order to help out the native fish populations by preying on exotic species like the spotted tilapia and the oscar. This has proved very successful and also led to a flourishing freshwater sportfishing presence in south Florida.

We bounced around a few canals in Miami, but all the peacocks we found wouldn’t give our flies the time of day. The only thing we were catching were Mayan chichlids. Our time was short in Miami so we had to do something drastic. For that reason we packed up and headed for Homestead’s Aerojet canal, the last place we could go before the Overseas Highway. If it wasn’t happening there, it wasn’t going to happen. 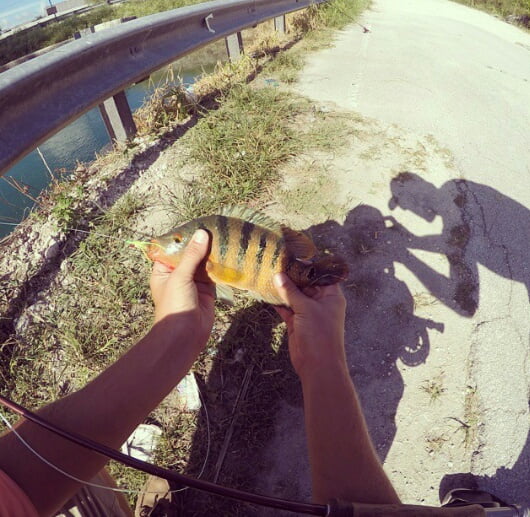 The first fish of the trip was a Mayan Chichlid. Check out my blog post, “Mayan Gold” for more about these awesome little chichlids!

Aerojet was the last hope. We saw peacocks as we did at other ponds but they were different here. Each one aggressively came and nosed our flies. Consequently, we were all on the edges of our seats. It didn’t disappoint.

Each Peacock we hooked aggressively chased and struck. The bite was made even cooler by the clear water we were fishing in, because of this we could see everything! Most fish were small, but we did get one fish that was larger. The fight was comparable to that of a snook in terms of the fish’s drag pulling prowess as well as the jumps they gave us.

Peacocks are native to Central and South America. As of now these fish live no where else in Florida or the United States for that matter aside from Miami and Homestead. It’s a bucket list fish and was a great way to start our tip to Islamorada.