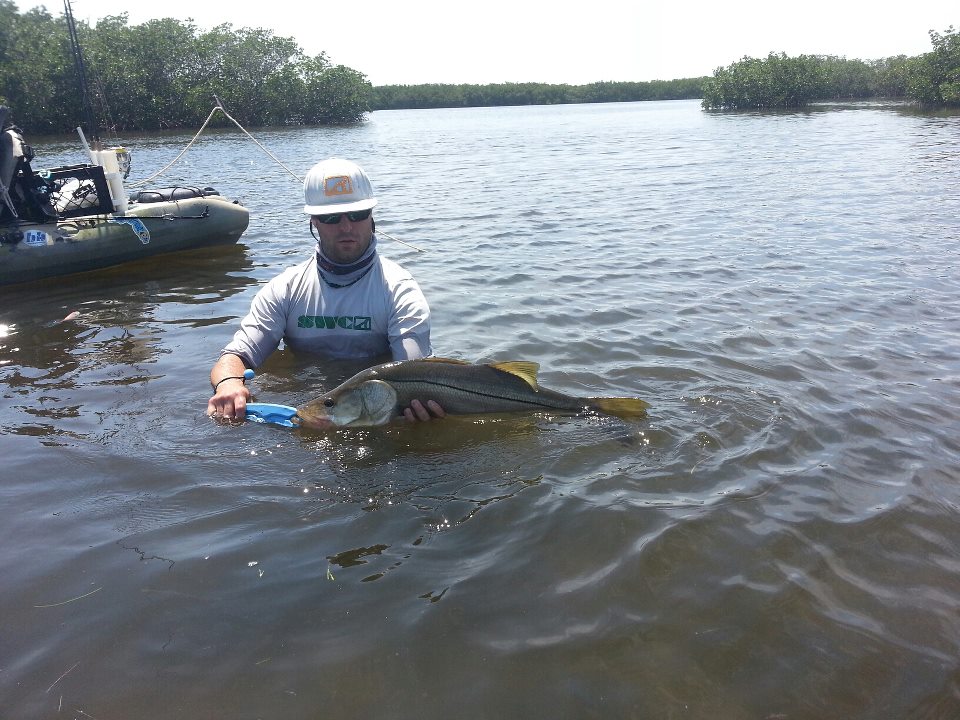 Summer is fast approaching, as a result, snook, one of Florida’s most prized game fish are well within the reach of shore bound anglers.

Anglers disagree as to what name to call it by – snook, linesider, saltwater pike, robalo or soapfish. That beings said, what anglers do agree on however, is that the’re one of Florida’s most exciting gamefish. Regardless, anglers can agree that they’re awesome fish!

Snook are starting to leave their winter time haunts in the back country and head for area beaches to fatten up for their spawn. This makes this species an easy option for anglers with and without boats.

“They’ll be there any day,” said local guide Stewart Ames. “I’ll absolutely be targeting them.”

The freeze of 2010 decimated snook populations to lows never before seen. Populations have rebounded somewhat since then, the numbers that previously existed simply aren’t there.

Consequently, the snook that are around now are either very small or very large, there seems to be an absence of middle sized fish. This is a sign of a population that isn’t healthy.

In contrast, Captain Neil Taylor had a different view.

“I won’t be targeting them,” said local kayak guide Neil Taylor. “We’ve had an early start to spring, I think they may be on the beaches now, but I won’t be fishing for them.”

Whether anglers choose to target snook these fish or not there are some important factors to keep in mind. Linesiders are within reach of shore bound anglers, but they are by no means an easy target.

As a result of this behavior I have had many frustrating days and long nights.

Beach snook are the biggest that an angler will come in contact with, typically being over 28 – inches long and commonly being found in the mid 30- inch range. Ironically, snook can be very picky eaters; factors like leader length, bait, tide, wind, time of day and presentation can all make the difference between catching a snook and catching a tan at the beach.

In addition to being picky eaters, beach snook pull out all the stops to not let themselves get caught. Firstly, they make hard runs, secondly use the current to their advantage and thirdly they use their sharp gill plates to try to cut the line and sometimes hug the edges of deeper troughs.

Most importantly, handle these fish with the utmost respect and care. Never lip a snook like a bass, support the stomach with one hand, try not to remove it from the water for more than a few moments, remove the hook in a timely fashion and be sure to revive the fish before letting it go.

Above all practice catch and release (aside from the handling with care).

Hence, if you don’t treat a snook in this careful manner it may die.

For more information about snook check out The Legendary Linesider.